…all the film directors and the hollywood crew go out and round up everyone who knows more than they do.

WATCHMEN is an overwhelming and impressive film, and is almost certainly the best adapatation possible of a very difficult book.  With that said, it does nothing that the comic does not do, contains at least two of the worst scenes every filmed, and, with exception of Jackie Haley and Billy Crudup, has no performances worthy of the name.  It is an odd thing, really.  I can’t see how it could have been done better, but it left me almost totally cold.  Maybe Alan Moore is right, and it never should have been done at all? 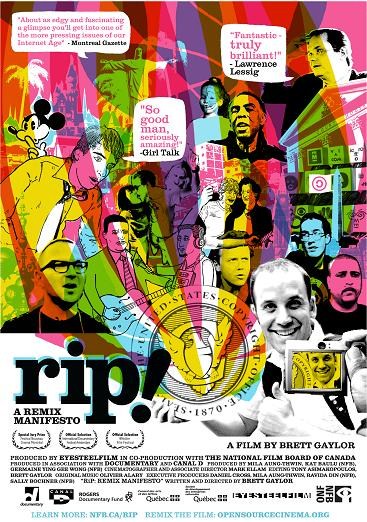 RIP:  A Remix Manifesto is a snappy piece of documentary-ganada about remix/mashup/free culture.  It’s a very tight piece of filmmaking that brooks no delay and less dissent.  I do wish the film had at least mentioned people like, say, Steinski, Coldcut, and so on, rather than focusing on Girl Talk.  At least now I know that I need to pin him down and figure out how his software works.

The film’s biggest problem, for me, is that it tries to beat its thesis to death.  Mashups and remix culture are tremendously important, but they are not the sole and only future of culture.  Fair use, copyright, and patents have huge and obvious problems, but throwing them out totally is not the answer.  Lars Ulrich and Metallica are assholes, but they had a point.  It would have been nice to hear from, say, Luke Chable, who lost a record contract in the early ’00s due to a track of his being available on the internet.

Regardless of which way you swing on control of content and ideas, RIP is worth a look.  It may make you angry, it may make you want to support The Pirate Bay, but it provides an exceptional look at how our culture has fractured, changed, and grown in the 10 years since The Internet Happened.  And there is no turning back from that.